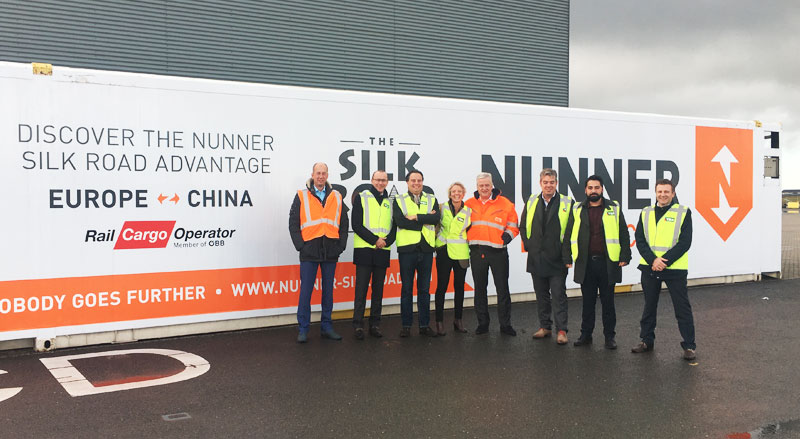 First ever train from

Amsterdam, November 29th, NUNNER Logistics plans to send the first ever freight train from Amsterdam to China beginning of March 2018, just after Chinese New Year from the TMA terminal in Amsterdam to the city of Yiwu.

After its departure from the Netherlands the train will arrive in Yiwu in the east of China, after is has travelled through Germany, Poland, Belarus, Russia and Kazakhstan. The 11.000 km journey by rail will take less than 3 weeks, which is half the time ocean transport takes. Apart from being much cheaper, and also safer, than air freight, rail produces around 20 times less CO2 emission than air freight.

Erik Groot Wassink, Director Special Products at NUNNER Logistics said : “We are proud to add Amsterdam to our China rail network, next to the direct trains we already operate between China and Neuss (D) and Moscow (RUS). This will be a great opportunity for shippers in the Northern part of the Netherlands to have a nearby rail connection to China, saving time, money and carbon footprint”

NUNNER, who is realizing this connection, works closely together with Austria’s “Rail Cargo Group” (Europe’s second largest rail freight operator), with the “Port of Amsterdam” and with the owner of the terminal “TMA Logistics”. NUNNER uses the 550.000m2 terminal of TMA already for storage of steel coming in by ocean and for the on forwarding by barge, rail or truck into Europe and Central Asia.

“This unique new connection is a perfect extension of our terminal activities in Amsterdam” according to Willem Mantel, General Manager of TMA Logistics. “It will make our hub even more interesting. By shortsea and by barge we connect not only Scandinavia and the UK to the China train but also Rotterdam, Antwerp and other parts of the Netherlands and Belgium are connected in a cheap and sustainable way directly to our terminal from where NUNNER’s China train will leave”.

Also for Rail Cargo’s Managing Director Tufan Khalaji the new connection is a valuable expansion of the existing network. He states: “By this new direct connection between Amsterdam and Yiwu we can further optimize the leadtimes to China’s coast. Yiwu is on a distance of only 290 km from Shanghai. Therefore this new connection will be the fastest connection between The Netherlands and the east coast of China.

The new service is part of China’s One Belt, One Road program – reviving the ancient Silk Road trading routes between China and Europe. The original Silk Road derives its name from the lucrative trade in silk carried out along its length, beginning during the Han dynasty (207 BCE – 220 CE).

Port of Amsterdam strongly supports this new, sustainable rail-connection, as it stretches the logistic possibilities of the Amsterdam Metropolitan Port. Koen Overtoom, CEO Port of Amsterdam: “This initiative strengthens our strategy to grow as a multimodal port. Not only will it give a boost to our logistic hub function in regard to other important European logistical centers, it also further empowers the multiple short-sea connections out of Amsterdam.

About NUNNER Logistics : www.nunner-logistics.com
NUNNER  is a leading provider of logistics services. Founded in Austria in 1955, the company is currently headquartered in Helmond, The Netherlands and it has 24 branches in Europe. The company offers an integrated portfolio of logistic services covering the total supply chain from source to end user.  NUNNER designs, develops, integrates, markets and operates advanced logistics solutions used by customers –  in all ranges of industry and trade – to create a transparent, cost efficient, and reliable supply chain and distribution system.

About TMA Logistics : www.tmalogistics.nl
TMA Logistics offers you full-service solutions for land, sea and air transport, stevedoring activities, cargo transshipment, project cargoes, storage, customs handling, value added services and more. All 24/7 and worldwide. Through our terminals we offer barge connections to the hinterland and shortsea services to Sweden, Finland, Antwerp and the UK.

Do you need more help?

We're ready when you are

Apply for a job at Nunner

At Nunner Logistics we want to give you the best possible value for money experience. Please fill in this form to start the process.